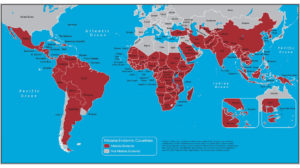 Malaria is a life-threatening disease. It’s typically transmitted through the bite of an infected Anopheles mosquito. Infected mosquitoes carry the Plasmodium parasite. When this mosquito bites you, the parasite is released into your bloodstream.

How does it spread?

Once the parasites are inside your body, they travel to the liver, where they mature.

The symptoms of malaria typically develop within 10 days to 4 weeks following the infection. In some cases, symptoms may not develop for several months. Some malarial parasites can enter the body but will be dormant for long periods of time.

Common symptoms of malaria include:

– shaking chills that can range from moderate to severe

How is Malaria diagnosed?

Your doctor will be able to diagnose malaria. During your appointment, your doctor will review your health history, including any recent travel to tropical climates. A physical exam will also be performed.

Your doctor will be able to determine if you have an enlarged spleen or liver. If you have symptoms of malaria, your doctor may order additional blood tests to confirm your diagnosis.

These tests will show:

– whether you have malaria

– what type of malaria you have

– if the disease has caused anemia

– if the disease has affected your vital organs

How is Malaria treated?

Malaria can be a life-threatening condition, especially if you’re infected with the parasite P. falciparum. Treatment for the disease is typically provided in a hospital. Your doctor will prescribe medications based on the type of parasite that you have.

In some instances, the medication prescribed may not clear the infection because of parasite resistance to drugs. If this occurs, your doctor may need to use more than one medication or change medications altogether to treat your condition.

Additionally, certain types of malaria parasites, such as P. vivax and P. ovale, have liver stages where the parasite can live in your body for an extended period of time and reactivate at a later date causing a relapse of the infection.

If you’re found to have one of these types of malaria parasites, you’ll be given a second medication to prevent a relapse in the future.

Where is Malaria common?

Malaria is found in more than 100 countries, mainly in tropical regions of the world, including:

– Large areas of Africa and Asia

– Haiti and the Dominican Republic

– parts of the Middle East

Malaria is not found in the UK – it may be diagnosed in travellers who return to the UK from risk areas.

In many malaria-endemic countries, malaria transmission does not occur in all parts of the country. Even within tropical and subtropical areas, transmission will not occur

– During colder seasons in some areas

– In deserts (excluding the oases)

– In some countries where transmission has been interrupted through successful control/elimination programs.

Generally, in warmer regions closer to the equator Transmission will be more intense and Malaria is transmitted year-round.

There’s no vaccine available to prevent malaria. Talk to your doctor if you’re traveling to an area where malaria is common or if you live in such an area. You may be prescribed medications to prevent the disease. These medications are the same as those used to treat the disease and should be taken before, during, and after your trip.

Talk to your doctor about long-term prevention if you live in an area where malaria is common.

Sleeping under a mosquito net may help prevent being bitten by an infected mosquito.

Insect repellent clothing and accessories are also a great protection from unwanted bites.

If you’re unsure if malaria is prevalent in your area, the CDC has an up-to-date map of where malaria can be found.