They are a slender long-legged fly with aquatic larvae. The bite of the bloodsucking female can transmit a number of serious diseases including malaria and elephantiasis. Mosquitoes can’t fly very far or very fast. Most mosquitoes can fly no more than about one to three miles, and often stay within several hundred feet of where they were hatched.

Where are they found?

Mosquitoes rest in tall grass, weeds, and brush near inhabited locations such as homes and other buildings and breed in stagnant, standing fresh water. They can be found in untended pools, birdbaths, clogged rain gutters, storm drains and anywhere else that holds stagnant water.

Mosquitoes have six legs. They also have a head, thorax and abdomen. On the head are two large compound eyes, two ocelli (simple eyes), two antennae and a proboscis. Two large, scaled wings sprout from the thorax.

Adult mosquitoes range in length from 7mm – 1cm; and have a narrow oval shaped body. They are mostly gray in color with white, silver, green or iridescent blue scales, they have white stripes across their abdomen. Mosquitoes have distinctive long legs and a long proboscis (nose) that the females use to draw blood out of people and pets. 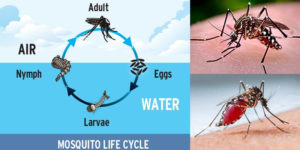 How do I know if I have been bitten?

The common symptoms of a mosquito bite can be red bumps and itching. This isn’t caused by the bite itself, but by the reaction of your body’s immune system to proteins in the mosquito’s saliva.

While one tube in the proboscis draws blood, a second pumps in saliva containing a mild painkiller and an anti-coagulant. Most people have minor allergic reactions to the saliva, causing the area around the bite to swell and itch. This reaction is also known as Skeeter syndrome.

How do they find you?

Mosquitoes can smell human breath. They have receptors on their antennae that detect the carbon dioxide released when we exhale. Those plumes of CO2 rise into the air, acting as trails that the mosquitoes follow to find the source.

Sweat helps mosquitoes choose their victims. Our skin produces more than 340 chemical odors, and some of them smell like dinner to mosquitoes. They are fond of octenol, a chemical released in sweat, as well as cholesterol, folic acid, certain bacteria, skin lotions, and perfume.

Body heat marks the target. Mosquitoes use heat sensors around their mouthparts to detect the warmth of your body – actually, the blood inside it – then land on you and locate the best capillaries for tapping.

Mosquitoes feed day and night. Some species, like the Aedes are daytime biters, while others, like Culex, start biting at dusk and continue a few hours into dark.

How do they feed?

Mosquitoes live on plant nectar when not producing eggs. All adult mosquitoes feed on the nectar or honey dew of plants to get sugar, and that provides enough nourishment for both males and females to live, but females also need to produce eggs. To create eggs, females need protein, which they get from the blood of animals.

A female mosquito locks onto her victim using a combination of scent, exhaled carbon dioxide, and chemicals in the person’s sweat. When she finds a suitable meal, she lands on an area of exposed skin and inserts her proboscis to draw the victim’s blood. The proboscis is the long, flexible tube extruding from her head, and it’s capable of piercing human skin.

So what’s the problem?

The world’s 3000 species of mosquitoes transmit more diseases than any other creature.

These three bear primary responsibility for the spread of human diseases –

Anopheles mosquitoes are the only species known to carry malaria. They also transmit filariasis (also called elephantiasis) and encephalitis.

Aedes mosquitoes, of which the voracious Asian tiger is a member, carry yellow fever, dengue, and encephalitis.

Mosquitoes transmit disease in a variety of ways. In the case of malaria, parasites attach themselves to the gut of a female mosquito and enter a host as she feeds. In other cases, such as yellow fever and dengue, a virus enters the mosquito as it feeds on an infected human and is transmitted via the mosquito’s saliva to a subsequent victim.

How can I stop myself getting bitten?

DEET is considered the ‘gold standard’ of mosquito repellents. Endorsed by the Centers for Disease Control (CDC), DEET doesn’t mask the smell of the host or jam the insect’s senses – mosquitoes simply don’t like it because it smells bad to them. A product containing 10 percent DEET can protect you for up to 90 minutes.

Two other repellents, picaridin and lemon-eucalyptus oil, have also proven effective and are now recommended by the CDC.

Insecticides work, but only in the short term. Permethrin, one of the most common chemicals used by local mosquito control programs, kills mosquitoes on contact by disrupting their central nervous systems. However, eggs and larvae often are not affected. Once the insecticide dissipates, mosquitoes can return.

– Use a mosquito net – These nets help to protect you while you sleep. They are treated with an insecticide which is harmful to insects and safe for humans. Perfect for hostels, hotels, or anywhere you may need extra protection.

– Use an insect repellent clothing treatment – this can help to protect by spraying on any linen, towels or textiles. Clothing can also be treated with LifeSystems EX4 permethrin clothing spray to make it insect repellent.