What is the Zika Virus?

The Zika Virus is a mosquito-borne infection – so in most cases it can only be caught if you are bitten by a mosquito that is carrying the virus.

Most people don’t have any symptoms. If symptoms do occur, they are usually mild and last around two to seven days. Commonly reported symptoms include:

– a low-grade fever
– joint pain (with possible swelling, mainly in the smaller joints of the hands and feet)
– itching
– rash, which is sometimes itchy
– conjunctivitis (red eyes)
– headache
– eye pain

That doesn’t sound too bad – so what’s all the fuss about?

There is evidence to suggest that pregnant women who contract the virus during pregnancy (at any trimester) may have an increased risk of giving birth to a baby with microcephaly (this means an abnormally small head and can be associated with abnormal brain development). This link has not been proven, but precautionary measures to reduce the risk for pregnant women are recommended as further evidence is gathered. Current advice from Public Health England is that women who are pregnant or planning to become pregnant should discuss their travel plans with their doctor and if already pregnant to consider postponing travel to any region where a known outbreak of the Zika Virus is occurring. If travel is unavoidable then they should take scrupulous insect bite avoidance measures.

So how do I make sure I don’t contract the Zika Virus?

The only way to prevent infection is to avoid being bitten by the mosquitoes that could be carrying the virus. Mosquito bites can be reduced or avoided by taking the following steps:

– protective clothing – cover up with loose clothing as much as possible. Insect proof clothing is even better, such as the Craghoppers NosiLife range that is pre-treated with insecticide.

– insect repellent – make sure any exposed skin is protected with an effective insect repellent. Health Protection Scotland strongly recommends DEET based insect repellents at a concentration of 50% and it should be applied regularly. They also state that DEET is appropriate for use in pregnancy, but if it is considered to be unsuitable then another, proven alternative should be used. The main alternatives are Picaridin, IR3535 and Oil of Lemon Eucalyptus.

– mosquito net – use a mosquito net over your bed when sleeping – and ideally it should be pre-treated with permethrin.

– air conditioning – mosquitoes are not likely to be a problem in an air conditioned room where the windows are kept closed.

– don’t travel to infected areas – women who are pregnant, or who could become pregnant are strongly urged to seek pre-travel advice from their health care provider before travelling to a country where the Zika Virus is circulating.

Is there a vaccine or a cure for the Zika Virus?

No – there is no vaccine or cure for the Zika Virus. There is no specific treatment for the symptoms either, but the NHS website states that drinking plenty of water and taking paracetamol may help to relieve them.

Are all mosquitoes a problem?

The Zika Virus is carried by the Aedes mosquito and typically they are only found in tropical regions. The virus was first isolated in the Zika forest in Uganda in 1947 and it then spread eastwards across the Pacific to the Americas.

Where is the Zika Virus to be found now?

The Zika Virus has been circulating in Africa and South and South East Asia for many years, but the main areas of concern now are South and Central America and the Caribbean. 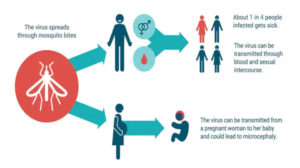 Most of the information above was obtained from the following websites: